Another Fight In Isaan

Another Fight In Isaan

It was my third fight in Thailand.

The Golden Era legend went by a different name to us. He was our teacher. His fight name was Lamnamoon Sor Sumalee. His name to us, Kru Yo.

The previous fight, I lost to a very strong Thai at a temple festival. There was a concert going on less than one hundred yards from the ring. The music was so loud I could hardly hear my cornerman between rounds.

The Thai blasted me with his switch kick for five rounds. I had trouble timing his attacks. That fight was eight days ago, and my shins were still pretty damaged. But I was determined to win this fight by knockout.

I watched Kru Yo and the Thai boys load the bed of the truck. They laid down a bamboo mat first, then added pillows and finally a big blanket.

One of the Thai boys, Bom, smiled at me as he took off his shoes and hopped in the truck bed to lay down. I kicked off my shoes and did the same. By the time we started to head to the fights, the sun hung low behind the horizon of rice fields.

Riding in the bed of the truck at night was amazing. As we got further away from the city, more stars began to dance throughout the night sky. I’d never seen the sky so alive. My mind wandered off to other planets. Other than the stars and the occasional streetlight, darkness surrounded us. The constant humming of the tires against the road became melodic, and the wind on my face lulled me to sleep.  My eyes closed.

Eventually, we pulled up to what looked like a primary school. Cars lined the street and motorbikes filled the small parking lot.

I got a good view of the venue. It was impressive. The ring was in the center of a kid’s soccer field with rusted sheet metal walls circling it. People who didn’t want to pay to get in pulled their trucks close to the sheet metal walls to look over. They created a circle around the thin walls. 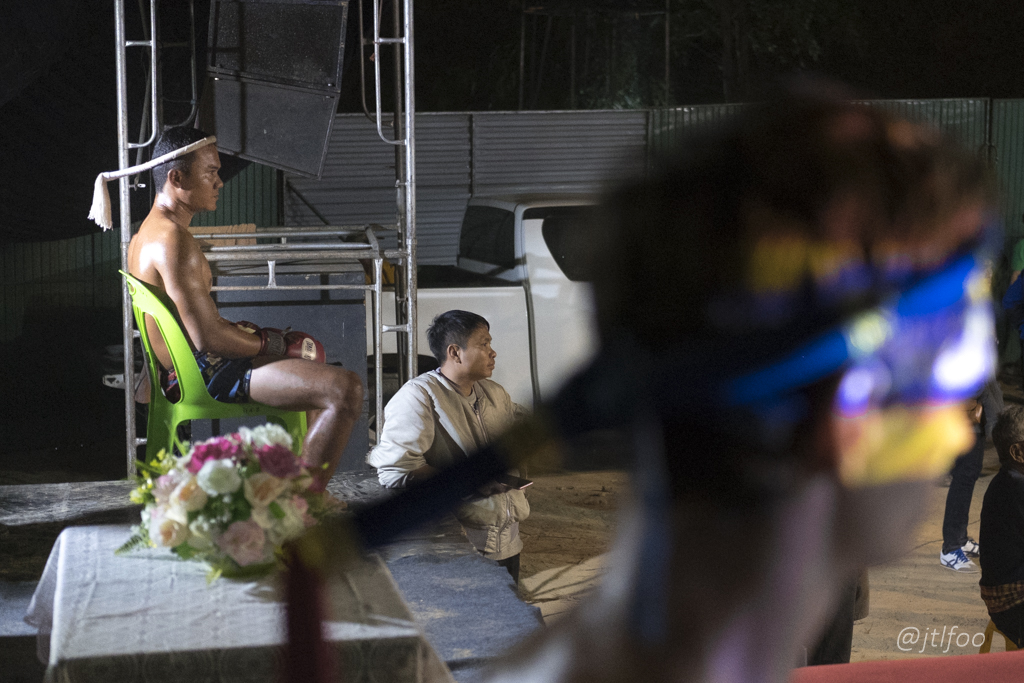 The ring was lit up with actual light bulbs tied to wire overhead of the ring. Whenever someone hit the canvas or the ropes, the lights bounced back and forth. The lights flickered. I thought for sure that they’d fall at any moment. It was well past 10 pm when we got there. The moon hung high above Isaan rice fields.

We found an open area to lay our bamboo mat and Kru Yo started wrapping my hands. He put tape, then gauze, then tape onto my hands. As he protected my hands, my nerves attacked. I thought of all the scenarios that could result in me getting knocked out, or my opponent not showing up to fight. My brain works funny that way, there’s no in-between. Something drastic is going to happen in the fight, or my opponent will get hit by a car before we get the chance to fight. Those are the two options.

At these countryside fights the promoters can rearrange the bout lineup as they see fit, at any point. Someone can be warming up because there are three fights ahead of them then be rushed into the ring to fight next. It’s common to end up waiting much longer to fight than expected. The liniment oil won’t burn anymore and the wind will chill the body to the bones. Damn near anything is possible at these shows. There is a chaotic element to fighting in the countryside.

My nerves were getting the best of me. I eyed every Thai boy in the venue that walked past me, wondering if they were my opponent. 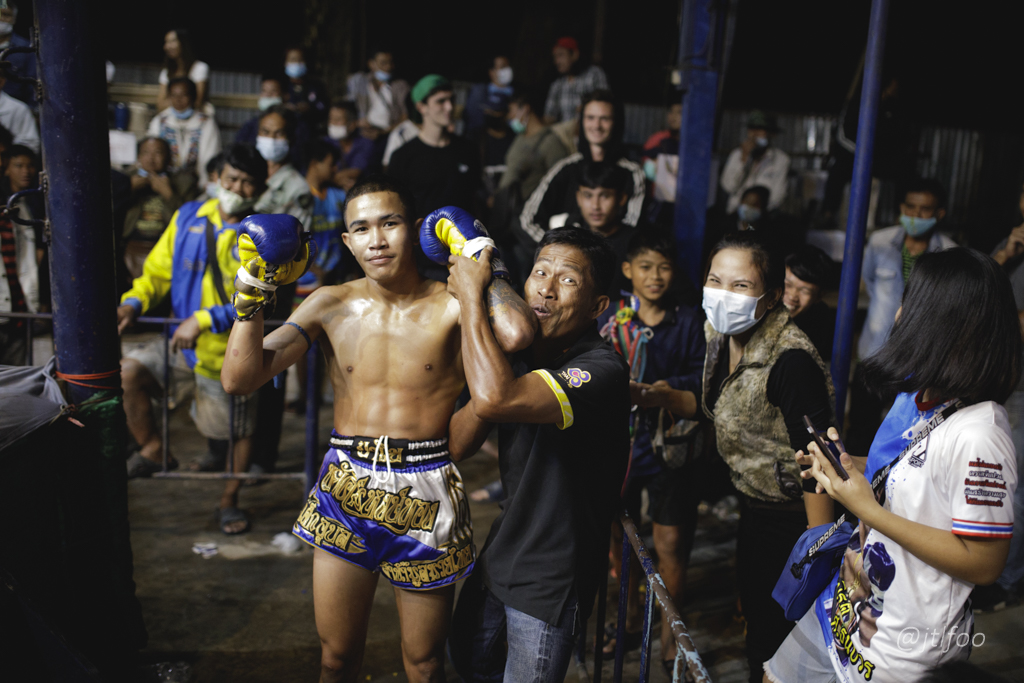 A boy walked past that seemed around my height and weight, I thought to myself, “Man, I hope I don’t have to fight him.” I could see the outline of his muscles through his shirt. By looking at the size of his calves, I felt pain in my shins and forearms.

After ten minutes of people-watching, Kru Yo took me to see the promoter. The promoter was waiting with my opponent next to him. It was the Hercules of a man that I saw earlier. I greeted the promoter, then he had Mr. Muscles and I both take our shirts off to see if we looked about the same size.  He gave us the nod of approval and I went back to the mat to get warmed up. 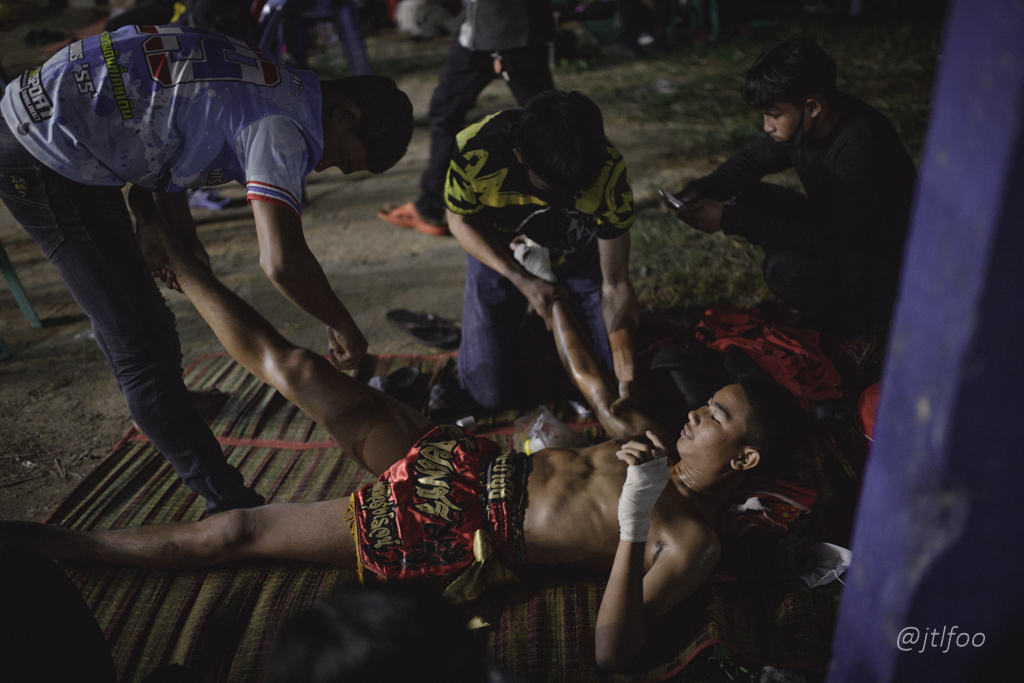 I was even more nervous. I knew that this was going to be a tough fight. After my oil massage, I began to shadowbox and a lot of people turned to watch. I’m sure that many of the Thai people had never seen a black foreigner like me in real-life. Some stared at me in complete amazement, and others in complete fear. I’m sure most of them were shocked to see a black foreigner in the middle of Isaan, fighting at a Muay Thai show. I watched the ending of the fight before me and we began to walk closer to the ring.

As we got closer, I could understand a little of what the announcer was saying.

“Next we have a foreigner from the U.S.A. Buakieow Lamnammoon Muay Thai!”

Everyone bursted into laughter as they heard my fight name. Hearing them all laugh even made me smile and relax a little bit. But right before I could walk into the ring, Bom grabbed me. The crowd went damn near silent and I asked Bom what was happening.

“Glua, glua!” Bom nodded his head over toward my opponents’ corner and shook his head.

I was confused as we walked back to our bamboo mat. Liniment oil covered my body from head to toe, my gloves were tied and taped on, and I was wearing my mongkon. But I could hear Kru Yo yelling in the distance. He had made his way over to my opponent after hearing he was too scared to fight me. His eyes glowed with rage and his tongue sounded sharp. The boy hung his head in shame.

The whole show came to a pause. There was no way the people were going home until the black foreigner with a Thai name hopped into the ring. 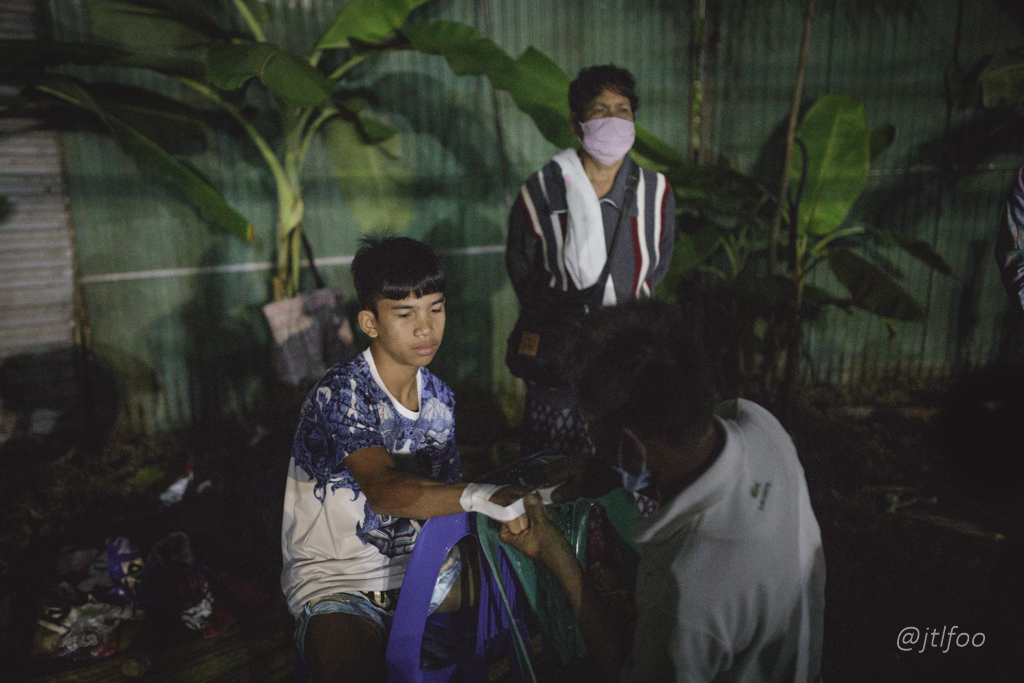 Then the gamblers began to walk toward me. As the promoter went around trying to find someone to fight me, the gamblers began their assessment. If gamblers haven’t seen two fighters fight before, they place their bets on who looks more fit. So they began to squeeze my arm muscles and have me flex for them.

The promoter had no luck finding me an opponent. There were a few moments of silence.

Then a man, who was sitting with his friends, took a big gulp of his beer. He yelled something I couldn’t understand.

It was something like, “If it must be done, I will valiantly fight the foreigner!”

As he rose from his seat and began his walk towards me, the sea of people began to part for him. As he walked toward me, he took off his t-shirt. This guy knew how to make an entrance. He kept walking forward until our noses were inches apart. I could smell the alcohol on his breath. By the look of his body, I could tell this man was in no shape to put up a serious fight. But we were around the same size, so the promoter okayed it. The crowd began to clap and cheer. We shook hands and started to warm up.

I was too amazed by everything that happened to be nervous anymore. And after warming up a little it was time to head to the ring. The gambling wasn’t serious but the people wanted to see a farang (westerner) fight. 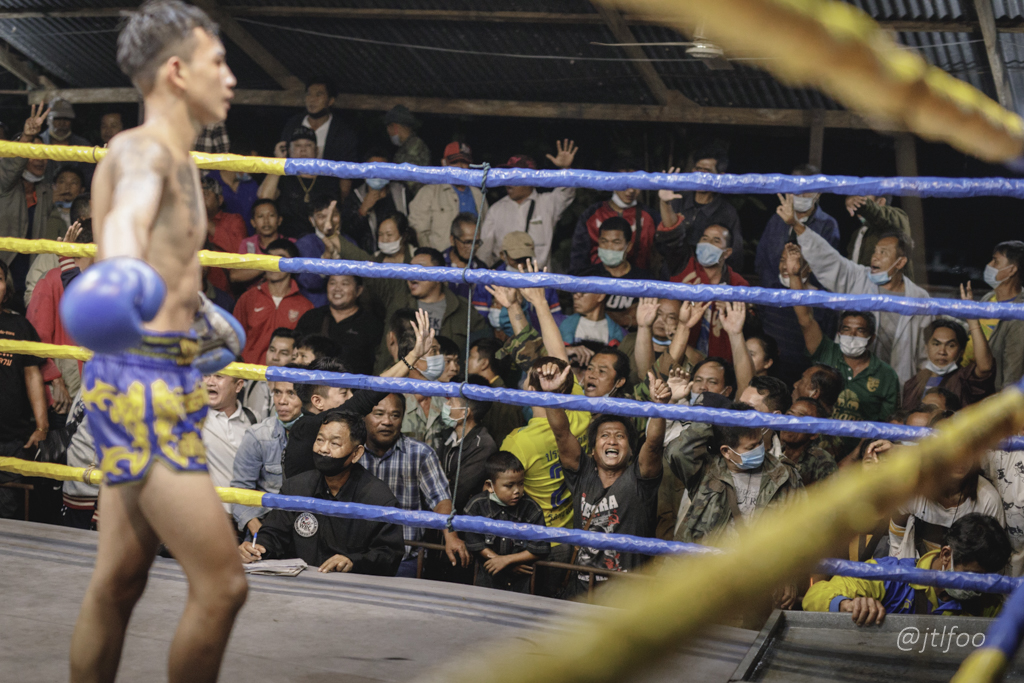 The first round was pretty usual for a five round fight. We both threw a few teeps and leg kicks as we got our rhythm and range. It was obvious that he’d had a handful of fights before (years ago). The second round picked up where we left off, but the pace was a little faster. After an exchange of blows, we ended up in the clinch.

As I went to turn him, he turned away, exposing the side of his head. I threw a downward elbow that landed behind his ear, causing him to stumble backwards. As he was regaining his balance, I threw a head kick and my shin landed right on his temple. He went down fast. The referee began to give him an eight-count, but waved the fight off when he saw him stumble to get up.

That was the end of it.

After the fight, I went over to my opponent to apologize and thank him for giving me a fight. His name was Lowdam. We shook hands one more time.

The promoter handed me two crisp one-thousand baht bills for my fight. I gave one to Kru Yo. The next day, I gave my padholder half of the other.

The experience was priceless.