The Importance of Sponsorships In Muay Thai: 4 Steps To Be A Sponsored Fighter

The Importance of Sponsorships In Muay Thai: 4 Steps To Be A Sponsored Fighter

Why Sponsorships Are Needed For Muay Thai

Sponsorships are a necessary part of business for the world of Muay Thai.

The business dynamic works on a variety of levels. Equipment companies sponsor fights, gyms, and athletes. Promotions are sponsored by a variety of companies. Gyms sponsor athletes. And so on…

These business relationships create a network of support for the sport. It helps established and new businesses grow.

It is very difficult for fledgling businesses and athletes to go alone. Sponsorships are a way to grow with other companies in a beneficial manner.

In this article we will look at:

This article is part of our growing series on the business aspects of being a Muay Thai Fighter.

To see how much a fighter makes click here 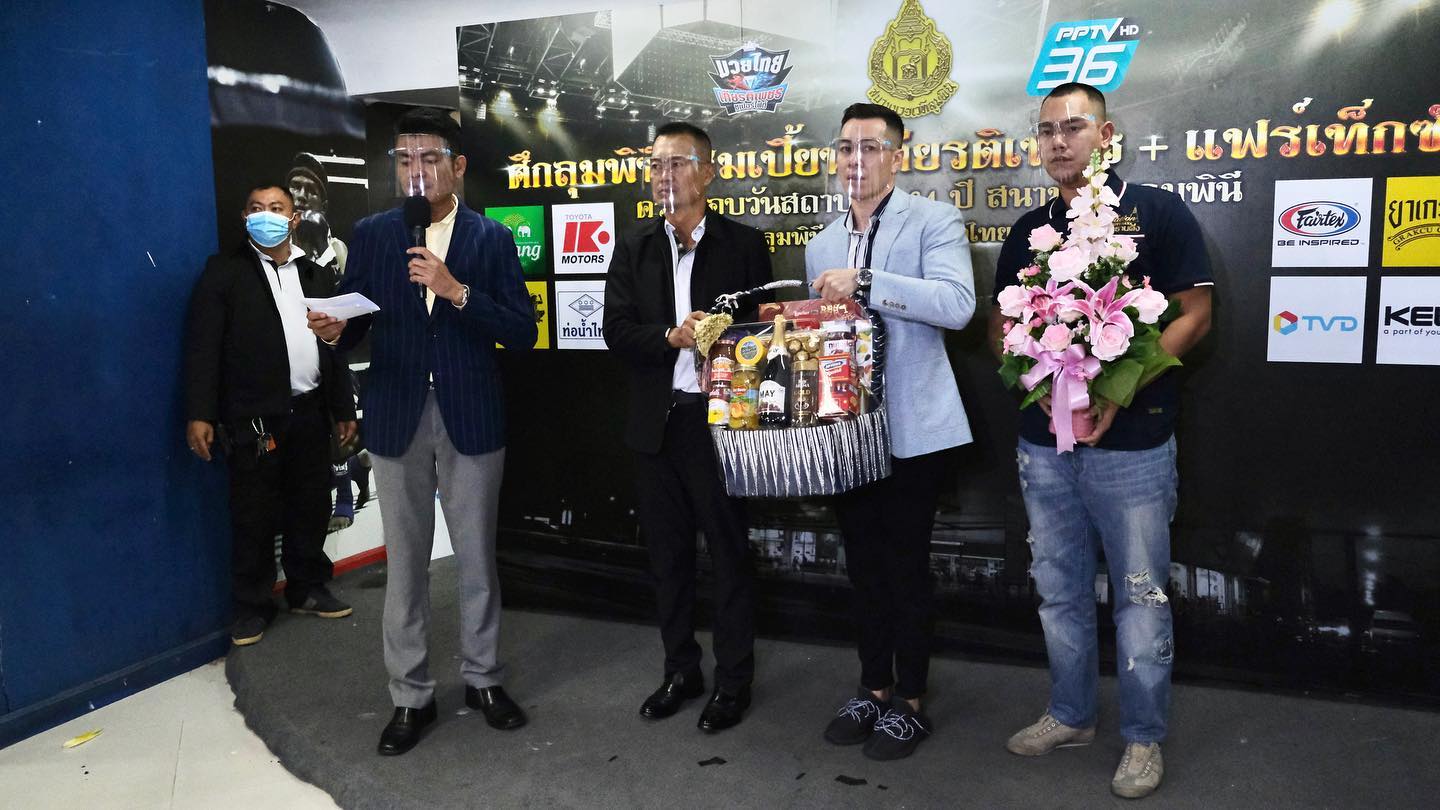 Mr. Pong, the MC for the Lumpinee birthday show reads off the list of sponsors for the event. Prem Busarabavonwongs the manager director of Fairtex Training Center and heir to the Fairtex company holds a gift basket for the show.
Fairtex, a large Thailand based Martial Arts and equipment company, has been a long term supporter of Lumpinee, and Kiatpetch promotions. Their gloves are used for the Kiatpetch shows. Boxers from the Fairtex Training Center actively fight on the promotion as well.

There are two types of sponsorships. The first type is patronage. This form is the least common but what many people assume sponsorship is.

This relationship has a patron give to a company or individual. It is an act of charity on the part of the giver.

The transfer is usually in money but can be in equipment or other services. A father that funds a fighter for her training and fighting overseas is acting as a patron.

The second type sees sponsorship as a business transaction. This type is the focus of this essay.

One party gives a second party support through goods, money, or services in exchange for promotional benefits. This type is not a charity. There are expectations for both parties.

When an equipment company sponsors a fighter with gear they are looking to get the value of the equipment back in advertising value. If Fairtex gives Stamp a pair of shorts worth $60. Fairtex would like to get at least $60 back in promotional material. This can be via social media, wearing it at fights, or in other forms of public advertising.

This type of sponsorship is far more common, far easier to achieve, and far less understood by fighters and the general public. 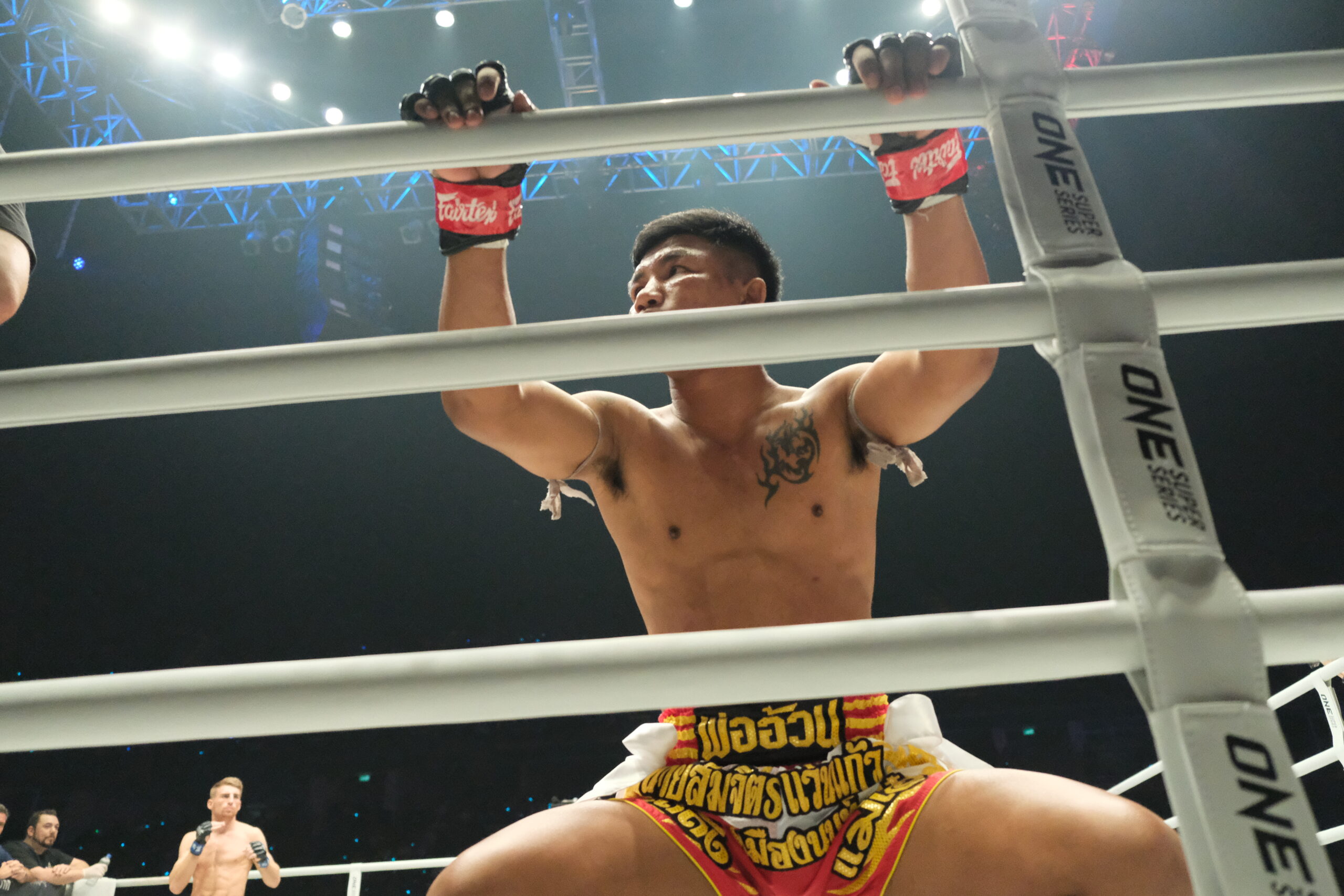 Fairtex sponsors ONE Championship events with gloves and glove tape.

In exchange, the organization may ask for monetary compensation based on their viewer count and perceived brand value.

Sponsorship for promotions can achieve big numbers. In 2015 NBA and Nike signed a deal. The partnership is worth roughly $1 billion according to ESPN.

In 2014 the UFC signed a six year agreement with Reebok for $70 million. The contract included both cash and the value of Reebok equipment provided according to ESPN. The sports organization is now equipped by Venum.

Sponsorship is a form of sports marketing. It is a large and growing. No matter how many times a fight occurs you never know what will happen. This is what makes rematches and trilogies so exciting. Fans are exposed to the marketing and brand of the sponsoring business many times.

Sports marketing is particularly attractive due to the increasing online presence of events. The sponsorship dollar can go much further for companies when they consider the potential exposure. Their brand is on a variety of platforms such as Instagram, Youtube, Facebook, and or Tik Tok. Performances are posted, reposted, and shared a unlimited amount of times.

It takes on average 6-8 touchpoints for a consumer to buy and engage with a company. Multiple exposures are critical turn points for a business’s return on investment.

Rebellion Muay Thai has a Youtube subscription following nearly 15,000 people. Many of their fight videos have well over 1,000 views. There are sponsorship ads/placement in the first 15 second intro. Also throughout the bout on the boxers shorts, the ring ropes, and the ring canvas itself.

This is an intentional act by Rebellion Muay Thai for promoter Sy Nadji.

“You’ll see on our YouTube channel and our Facebook. It’s always presented by one of our sponsors. That’s something we provide as an overall part of our sponsorship proposal.”

The Four Steps Of Sponsorship

The quest for finding sponsors is one that all levels of business must undertake. The journey is similar on all levels though. It is about building relationships.

Here we’ll look at the different stages of becoming a sponsored fighter at a gym.

For fighters, the beginning of a sponsorship relationship starts as a customer. Gyms or equipment companies will want to see the potential fighter using their product.

Because of shifts in advertising, consumers are becoming warier of disingenuous sales tactics. It also shows commitment on the part of the fighter to the gym. 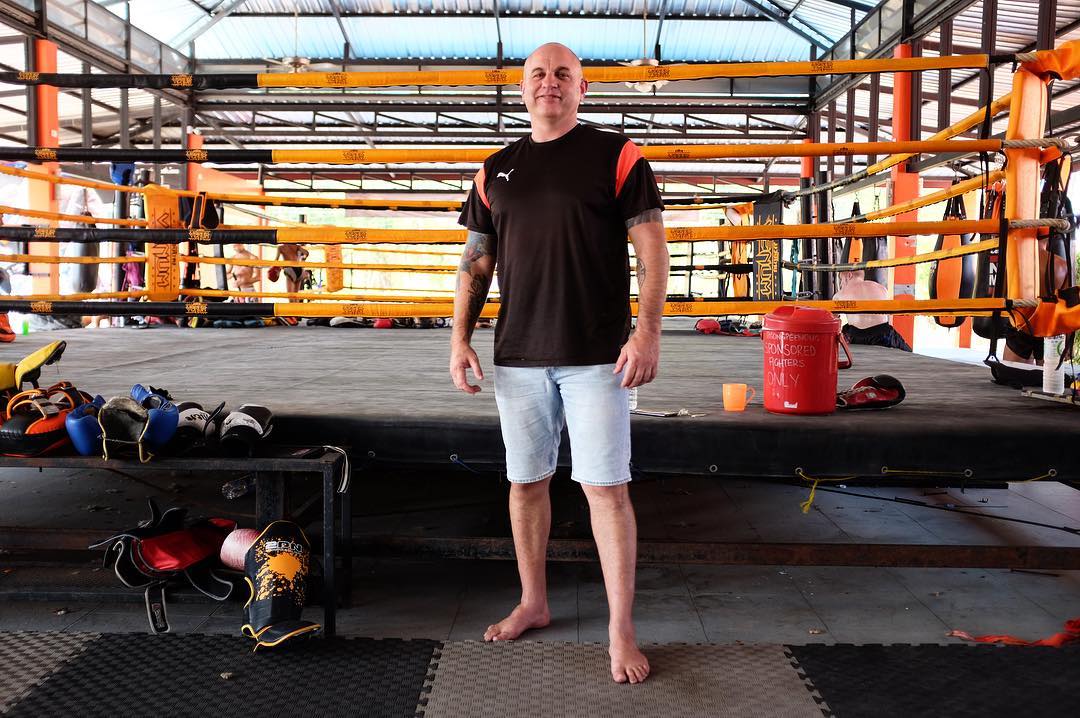 “I’m more likely to reward people that show that they’re dedicated to the gym. They come back, come back, and then join the team. Rather than somebody who is trying two or three different gyms. Then thinks that they can come in and join our team and train for free.

Once the fighter comes to the camp they can become an advocate of the gym. Becoming an advocate is simple. The boxer will advertise their presence and their journey with the gym.

For gyms the fighters and their audience become an extra platform.

“In the main (fighters) they give us a platform from which to promote what we have to offer in the quality of training at the gym. The more well known they become, the bigger that platform is.” – Sor Sumalee

Advocating occurs in a variety of ways.

Even simple things like positive Yelp and Google reviews go a long way for a business.

The next step on the journey is to become an affiliate. With gyms this usually sees the boxer get a discounted rate on membership. They have been long term and reliable advocates of the gym and reliable customers.

Discounted training shows a commitment on the part of the gym to the member and vice versa.

For equipment companies becoming an affiliate has the boxers receive a part of sales for items.

Tracking sales through affiliate codes is a way for the company to get a direct return on investment from fighters. The company gets to access the athlete’s online community providing a great new market.

The Power Of Networks In Muay Thai

This works especially well for fighters that are in Thailand but have a fan base in other countries.

“Social networks are, in many cases, a good tool for avoiding costly market research. They are the shortest, fastest, and most direct way to reach your audience through a person who, in that specific community, has more credibility than anyone. The athlete ‘delivers’ to their sponsor a consumer base of millions of people who every day are interested in what they do, what they feel, what they consume. No need to go to a Nike shop window to see Cristiano Ronaldo’s latest boots. He sells them for you directly via a Tweet.” –  JOHAN CRUYFF INSTITUTE

“It’s hard to find suitable Thais for affiliate sales programs. It’s better for western fighters who like to create content and engage with an audience that buys stuff. The language barrier is too much for them. Also, it fits certain personalities better. – Kyle Ching founder of Primo Fight Wear

The final step in the sponsorship journey is to become a sponsored fighter. This step comes after all the others.

First, sponsorship at this level is very much a business relationship. The gym will take a percentage of the fight purse in exchange for training, feeding, and housing the boxer. Foreign fighters will get better contracts than their Thai counterparts. It is common for Thais to split the purse 50/50 with the gym.

Gyms will act as managers for the boxers and get them bouts.

Many times there is no formal contract for sponsorship, although that is changing, especially with the emergence of MMA fighters.

Athletes will sign non compete contracts. If they train at the contracted gym they are barred from training at other gyms in the region after they leave the sponsorship.

Having sponsors is a great way to advance a career. Yet it comes with responsibilities and potential problems.

Fighters must understand what the gym offers beyond training. Online exposure is something that many boxers overlook but that is incredibly useful long term.

Gyms need to look at the personal track record of fighters as well. As Fisher noted, gym hoppers, and or bridge burners rarely work out well for anyone.

There can be conflicts of interest in with values or athletes and boxers going separate ways. Athletes, or companies, that misbehave may have their contracts ended.

The sponsorship obligates boxers to take bouts contracted to them. Certain matches may not be in the athlete’s best interest though.

A boxer on a run of bad form or may be let go from their contract. Sponsorship is still performance based.

Sponsorship involves relationship management. The problems of this were recently seen with Hans Mollenkamp of Monster Energy. Photographer Courtney Henderson accused Mollenkamp of coercing athletes into uncomfortable situations for media clout on his personal page.

Whether these accusations are true or not matters less than how athletes in the future manage their relationships with sponsoring companies.

It has us ask important questions. What, when, where and with who can sponsoring companies can do? How can fighters and companies help each other grow more? How can we continue to grow the business of Muay Thai? 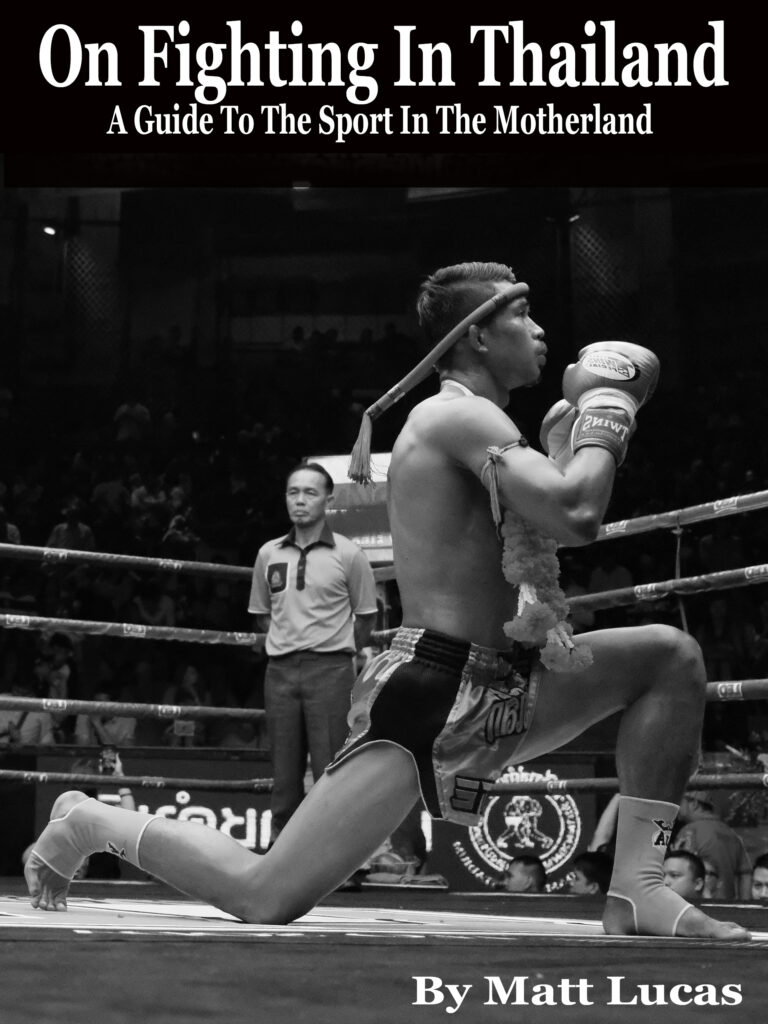